On July 13, 2020, Utah submitted a 1115 demonstration waiver application to the Centers for Medicare and Medicaid Services (CMS) to amend their current waiver to provide Medicaid coverage for qualified justice-involved individuals, in the 30 day period immediately prior to their release from incarceration. This amendment followed the passage of House Bill 38, “Substance Use and Health Care Amendments”, in the Utah State legislature.

Other states have taken similar action in this space. On October 31, 2019, the State of New York submitted a 1115 demonstration waiver application to CMS to amend their current waiver, to allow for federal Medicaid matching funds to be used to deliver targeted Medicaid services to individuals who are justice involved. Similar to Utah, these services shall be provided in the 30 day period immediately prior to an individual’s release from incarceration. Eligible beneficiaries are individuals who have two or more chronic physical/behavioral health conditions, a serious mental illness, HIV, or an opioid use disorder. At the time of this publication, the waiver is pending approval from CMS.

Utah intends to implement the waiver effective July 1, 2021 through the end of the current waiver approval period, which is June 30, 2022. The federal public comment period will be open from July 13, 2020, to August 12, 2020. Click here for specific details on where to send comments.

In order to be eligible for Medicaid coverage, an individual must be a “qualified inmate”. A qualified inmate is defined as an individual who is incarcerated in a correctional facility with 30 days or less before release; and has a chronic physical or behavioral health condition, or a mental health condition, or an opioid use disorder. These individuals must also meet the general Medicaid program requirements which include, being a resident of Utah, being a U.S. Citizen, and meeting the income eligibility criteria.

Individuals eligible under this demonstration will receive the benefit plan applicable to the program in which they are eligible. Below are the benefit plans for each Medicaid program/group. 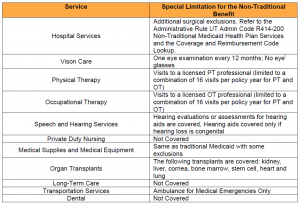 Cost sharing requirements will not differ from those provided under the state plan. Individuals eligible for Targeted Adult Medicaid are exempt from cost sharing.

Individuals who preside in one of Utah’s five largest counties will be enrolled in an integrated plan operated by a single managed care entity that provides access to both physical and behavioral health services. Beneficiaries in the remaining counties will enrolled in a pre-paid mental health plan.

Individuals in the Targeted Adult population will receive benefits through a FFS delivery system.